The good news is that your .25 calibre Exact Kings have produced the first ctc sub minute of arc 5 shot 100 yard ( 91.44 m ) groups that I am aware of being shot with this calibre air rifle.

These were shot at "Moffitt Range" in The Snowy Mountains in southern NSW Australia over this weekend. Even though it is now spring time the mountain peaks are still covered in snow.

The rifle is John Bowkett tuned BSA .22 Hornet but with a special BSA 58.5 cm .25 cal 6.35 mm barrel sent by John Bowkett for testing these pellets. These Exact Kings groups were shot at an average 271 mps / 890 fps ( 44.7 fpe ). The pellets were sized down to skirt size 6.35 mm for these tests. The rifle was shot over two sand bags as seen in the picture of the range further down.

A picture of the range showing the rifle and the 100 yard target. Safe shooting is enabled to 500 metres into the distant hill.

I measured ballistic coefficient from this rifle between 2 yards and 50 yards as being 0.039 at an altitude of 1234 metres which corrects to 0.034 at sea level. This I consider to be excellent for such a stubby pellet of this calibre.

This 25 shots string was chronographed at 6 feet from the muzzle when shooting the 5 of fifty yard groups. It showed an extreme velocity spread of just 6.2 fps or 1.89 mps. This is an amazing consistency.

This is a tribute to the amazing John Bowkett regulator installed in the rifle ( his own special, not the factory standard ) and to the minimal weight variance of the Exact Kings. 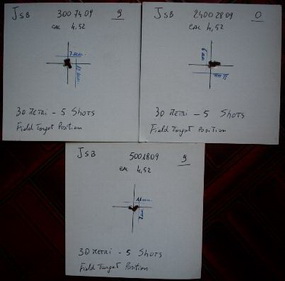 Italian FT Champion 2009 - Vincenzo Spagnuolo use solely JSB pellets for many years. On the picture you can see his results from testing JSB exact (diameter 4.52mm, weight 0.547g).

After very long research and testing we finally manage to produce cal. 25 pellets - EXACT KING. Shape of the pellet is typical for the exact line. The pellet weights 25,4 grains. The result of the testing is very impresive and fulfill our demand on quality. We tested the pellets in our testing facility with Daystate Airwolf MVT. As you can see on the picture - 5 shots, 50 yards, CTC 13mm. 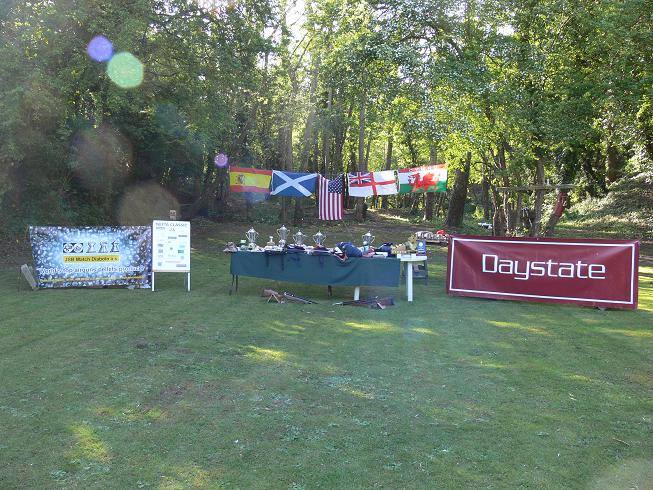 Our company provided some pellets as prizes for the NEFTA classic.

On 10th May Philippine national shooting association in partnership with our Philippines distributor held shooting competition.

„It was shot in a sanctioned Benchrest competition ( against rimfires ) 5 shots at 50 metres and with a BSA Hornet prepared by John Bowkett.“ The 50 metre group was officially measured at 0.141 inches or 3.58 mm centre to centre.

Grand Prix of Liberation in Pilsen in sports shooting

Grand Prix of Liberation in Pilsen in sports shooting was dress rehearsal for World Cup Munich, which is held between 16-18 May. Over 500 shooters took part of this competetion. We built a small booth and gave away a lot of promotional material.

We decided to give support to czech young shooters.
Page: 1234