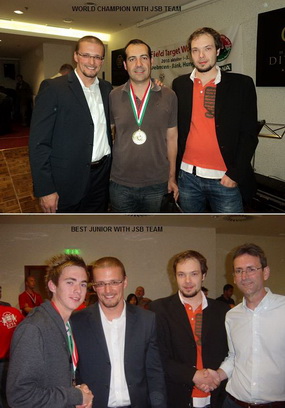 Field Target worlds 2010 was held in Hungary near Debrecen. There was over 150 shooters from all over the world. Most of the shooters were using JSB pellets. Also the winner - José Redondo from Spain and best junior - Craig McDonald from UK. Results here , Photos here . 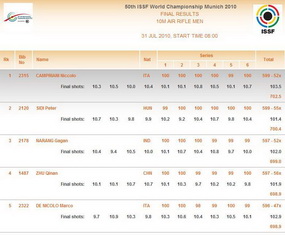 Two gold medals in two of the three classes, also getting the aggregate score of the three matches to achieve European champion 2010 and world cup winner - That is Carl Boswell and his great performance with JSB exact Express pellets. 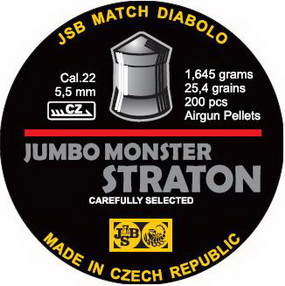 Pointed version of clasical exact monster. The weight has been chosen to fit the most powerful air rifles currently available on the market. It is a really heavy weight pellets that is stable even at 50J+ power levels but fits also 70J+ rifles. Number one choice for an air gun hunters.

Grand Prix of Liberation in Pilsen in sports shooting

Grand Prix of Liberation in Pilsen in sports shooting. Over 500 shooters took part of this competetion. We built a small booth and gave away a lot of promotional material. Václav Haman using JSB pellets finished 1st with 701 points (597+104,0). Congratulation!!!

100 meter airgunning in the Netherlands

A few years ago some airgunshooters in the Netherlands started matches with airguns at 100 meters. The reason for that was the increasing quality of airguns, pellets and airgunners. Of course, some airgunners were shooting at 100 meter earlier but there weren’t 100m-airgun matches. To start a try-out match was organized. Meanwhile many 100m matches have been organized and they are still becoming more popular.
The rules of our 100 meter matches are that contenders shoot in a lying or benchrested position. There are no limits in energy or calibre. The front of the gun is supported by a bipod, a beanbag or frontrest. The backside of the stock cannot be supported so there lies the technique of the gunner. Because the matches are almost always in a indoor situation a front and rear supported gun will make winning almost only result of the quality of the material.
Popular guns are Air Arms S400/ S410, Weihrauch HW100, Theoben Rapid, Daystate Airwolf, BSA Sportsman.
The smallest 5 shot 100m group that was produced during a match was 21,7mm. The pellet used was JSB Exact Jumbo in 5,52 mm. This is the most successful pellet that is used during our matches. Although there are no limitations in energy or calibre most gunners use energylevels between 30 and 50J in caliber .22. Some shooters that use Air Arms S400’s and Air Arms S410’s prefer the JSB Heavy in 5,52mm. Besides the accuracy of JSB pellets they are also preferred because of their consistency in weight. Although fanatic 100mairgunners weigh and select their pellets before every match.
In the years that followed 100mairgunners increased their technique and found out which guns, scopes and pellets were most suitable for 100m airgunmatches. We are very delighted that JSB made it possible to bring 100m-airgunning to a next level!
Contact: info@100mairgun.nl
Website: www.100mairgun.nl 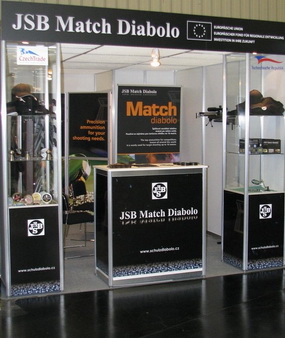 Thank you for visiting our booth at the IWA show. 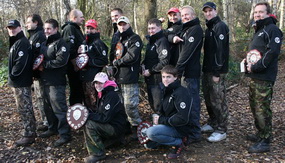 We are proud to be a partner of UKAHFT association and championship.
Chris Cundey sponsored by us finished 6th this season. We are really happy to hear that the 2009 UKAHFT winner Peter Sparks are using our pellets and are satisfied with it! Congratulation to all winners!